I am always a fan of musical movie. I remembered my first musical movie was Moulin Rouge which were featured by Nicole Kidman and Ewan McGregor. After watching it, immediately I know I'm loving it and will try to watch every musical drama if possible.
So far, I had watched a few musical movie which are Moulin Rouge, Love (mandarin version) and High School Musical. Meanwhile, I had also watched two musical theater which are Zingara (at Conrad Jupiters, Gold Coast) and Chicago (at Star City, Sydney). 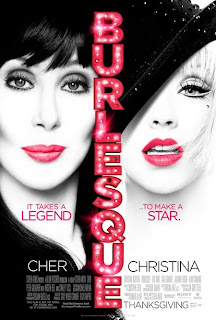 Recently, Burlesque (pronounced as "Bur-les") was released in New Zealand's cinema on 13th January 2011. My partner and I went for the movie 18th January 2011 on the evening session at Hoyts. I personally think this is another good musical drama that may win a few awards in the coming Oscar.

This musical movie is about a small town girl, Ali (Christina Aguilera), from Iowa who bought a one way ticket to Los Angeles to get a singing or dancing job. She ended up being hired by Tess (Cher) in Burlesque Lounge. Meanwhile, Burlesque Lounge is facing financial and artistic challenges to keep the aging theater lounge alive. It talks about the journey of how Ali eventually become a center of attraction with her voice and helped Burlesque Lounge regains its popularity.

Should you a person who likes to watch musical movie, I strongly recommend you to watch. Thumbs up Burlesque!
Posted by Agent Hippo at 3:57 PM