From 2nd March until 20th March 2011, it is the Auckland Arts Festival. 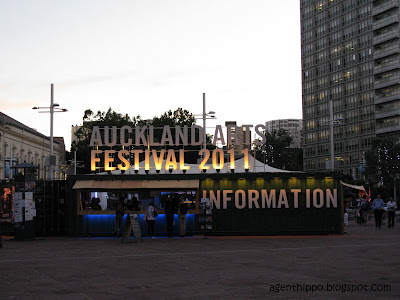 The festival garden is situated at the Aoteo Square. During the festival, everyone get to enjoy the programme of free entertainment at the TV3 Garden stage. DJs and live bands take it in turn to fill the garden with music, playing well into the night on every weekday from 5pm and on the weekends from 2pm onwards. Food stalls and Stoneleigh Bar is being set up at the garden for people to have a bite and a glass of wine while enjoying the festival in the garden. 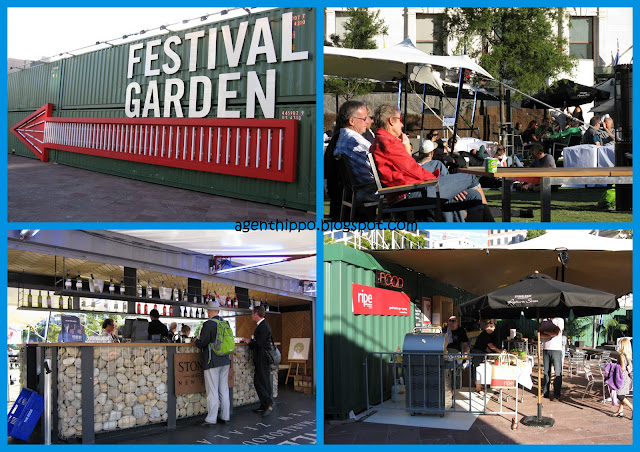 
The Vietnamese Water Puppets shows are being run by the Thang Long Troupe whom began touring around the world since 1987 and winning the hearts of a large number of audiences of Arts Festival such as Japan, Switzerland, Australia, Thailand, Spain, Portugal, Hong Kong and Denmark.


We attended the 7.30pm show on last Tuesday. As it was a free seating, we arrived quite early and queue up in order to get the best seats for the show.


The show started of with some instrumental music and also New Zealand national anthems. 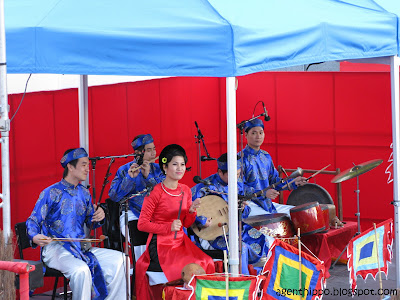 The whole show was being played with Vietnamese songs in Vietnamese language. Therefore, a piece of narration paper was given to all the spectators for a better understanding of what is the show all about.


I personally think that this show will be much better if it is being spoken in English, as I would like to know what were they talking about during the show and not just enjoying the puppets dancing around.

Luckily we managed to get the ticket with half price as the benefit of being an AA member. Therefore, it still worth the money.

About Water Puppetry
Water Puppetry is a traditional Vietnames folk art form which originated around 1000 years ago during the Ly dynasty. Villagers in the Red Silver Delta and other rice-growing regions in Northern Vietnam stages water puppet performances to celebrate the end of the rice harvest, religious festivals and other important occasions. Inspired by the paddy fields, rivers, canals, lakes and ponds of the Northern Delta, water puppetry exists in complete harmony with the natural environment.


Village festivals which marked the beginning and end of the agricultural cycle, were a time for peasants to pray for heavy rains. These prayers included rituals such as releasing captured aquatic creatures, washing statues of Buddha and other deities, cleaning pagodas, aquatic competitions and water puppetry.


Water Puppet Festivals were originally presented in rice paddies. A pagoda was built on on top of the paddy to hide the puppeteers who stood in the waist deep water. Then, as now, the water acts as the stage for the puppets and as a symbolic link to the rice harvest. It also hides the puppet strings and puppeteer movements, improves the musical and vocal acoustics, and provides shimmering lighting effects. Depending on the type of show, the Water Puppet theater could be a permanent structure or (more commonly) a temporary structure built for touring rural communities.


A Water Puppet performance depicts the daily activities in Vietnamese rural life as well as important historical events and ancient legends. Each puppet is hand-carved and given five layers of lacquer paint to protect it from the water and to add vital colours to the performance.


The traditional music accompaniment includes Vietnamese flutes and the dan bau, a one stringed instrument native to Vietnam. Its plaintive tone mimics the human voice, and was thought to have strong powers over the hearts of young women.


Programme
Festival drum beats
Drum beating is a ritual conducted at important festivals in Vietnam. The ancients Vietnamese produced bronze drums with a wide range of patterns that create thunderous rhythms. In the center of the drum-head a star is surrounded by intricate motifs of rural life, peasants and animals such as birds, deer and chickens. 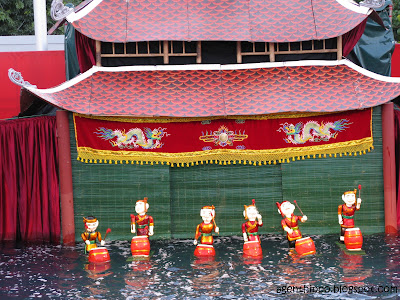 Prelude to the performance
Teu is the unique buffon of folk water puppetry who embodies the typical qualities of the Vietnamese people. Teu is a cheerful, humourous and intelligent character who enjoys life.


He guides the audiences into the magnificent world of water puppetry and creates a joyful atmosphere for the performance.


Dragon Dance
The Dragon tops the list of four sacred animals which also includes the Unicorn, the Turtle and the Pheonix. According to legend, the Vietnamese nation is descended from the Dragon and the Fairy. 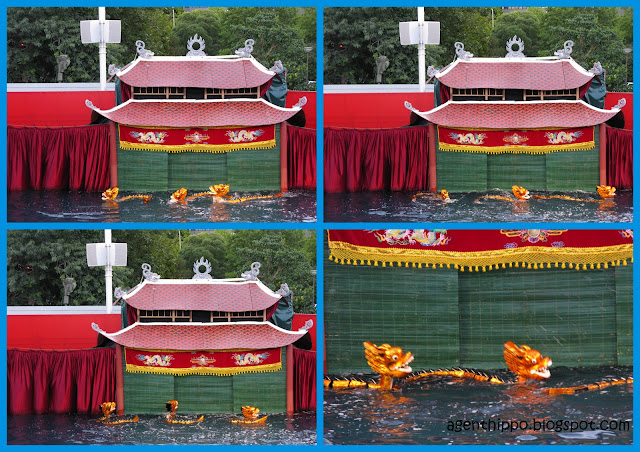 Buffalo Fighting
"The buffalo is the basis of the peasant's livelihood".
Water buffalo are diligent and hard working by nature and till the fields with their farmers. But sometimes buffalo have a naughty streak and fight with other buffalo. 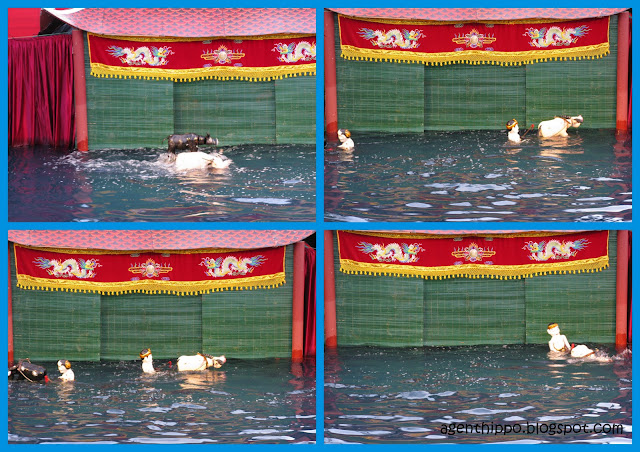 Farming: Plowing and Rice Planting
"Let's do farm-work, though it is hard it will bring wealth to us."
The puppets are busy depicting the various activities crucial to agricultural life such as tilling the soil, planting rice and irrigating the fields.
"Plowing and planting rice-seedlings is part of daily work, The Vietnamese peasants on the rice field always aspire to have bigger crops." 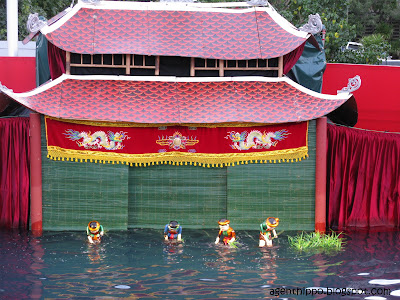 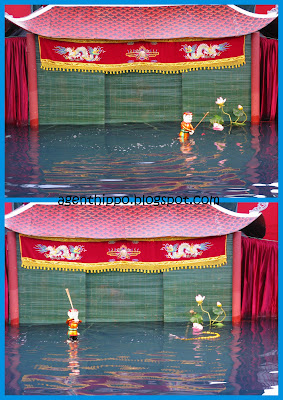 Frog-Catching
After long hours of physical labour on the rice-field, the Vietnamese peasant often goes frog-catching to supplement their diet and to sell in city markets; frogs are considered a succulent dish. Frog-catching is specialised activity, requiring dexterity, patience and expertise.
Children Playing with Water
Vietnam has many ponds, lakes and rivers which have contributed to the fertile rice fields across the country and to shaping the beautiful rural landscapes. For Vietnamese children, playing in the limpid water of a lake or river in the warm sunshine is an incredibly pleasant experience. 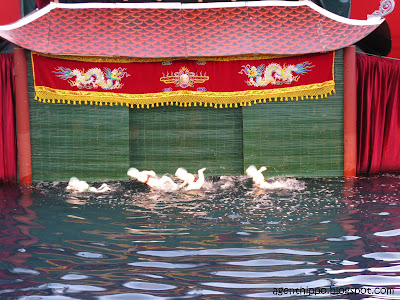 Fishing
Vietnamese peasant fish both as an occupation and pastime. They make simple fishing instruments such as rods and trapping baskets and skillfully use them to catch fish. 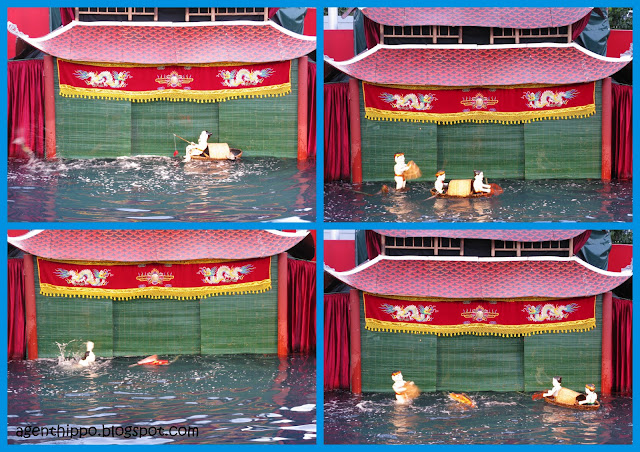 CHAU VAN Singing
Chau Van is a kind of folk song performance that originated in the 16th century. Chau Van combines singing and a ritual often used for praising the deities and national heroes. Its music and poetry are mingled with a variety of rhythms, pauses, tempos, stresses and pitches. In traditional times it was said to have captivated rural workers' hearts. 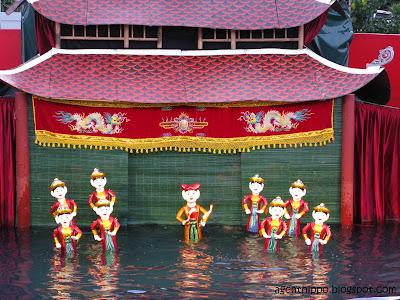 Quan Ho (Love Songs)
This call and response between men and women is an expression of love which is traditionally sung at spring and autumn celebrations. It is heard in Bac Ninh and Bag Giang, northern areas of the capital. UNESCO identified Quan Ho as an intangible cultural heritage treasure in 2009. 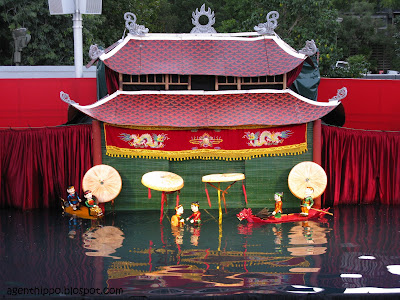 The Dance of Phoenix
According to the traditional creation myths of the Orient, the phoenix is king of all birds. The courtship of the  phoenix depicts love and happiness between husband and wife. 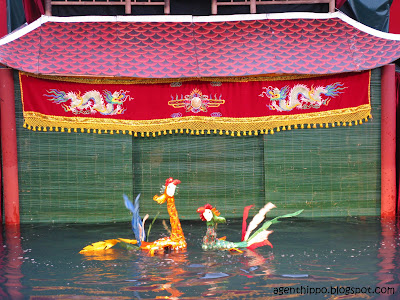 Dance of the Fairies
The Vietnamese people consider themselves descendants of the Dragon and the Fairy. Legend has it that in 2800 BC, the Dragon King Lac Long Quan married the Fairy Au Co. Together they produces 100 eggs in a pouch, which later hatched into 100 sons. When grown, fifty sons followed their mother to the mountain regions and fifty to the coastal regions. The eldest son was enthroned under the name Hung Vuong and became the founding King of the Vietnamese royal dynasties. He named the country Van Lang. The dance of fairies represents the Vietnamese people's aspiration for a happy peaceful life. 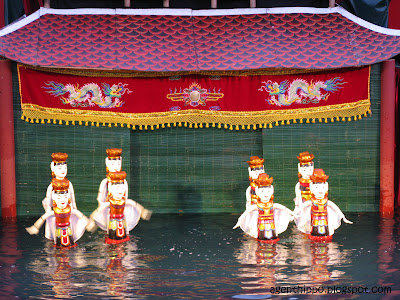 Dance of Four Sacred Creatures
The imperial dragon is called Con Rong and leads with pack of mythical animals the Lion, Tortoise and Phoenix. They perform a divine dance that exalts the beauties of nature and human life. 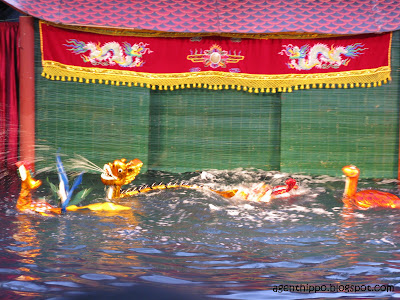 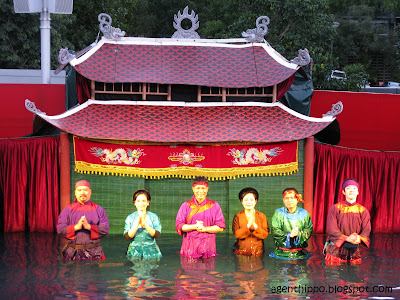 If you have not watch a Vietnamese Water Puppet before and can't imagine how it is through my photos, you can watch some of the video clips from YouTube. I had found one which had some similar snippets of the show that I had watched. Below is the link:-
http://www.youtube.com/watch?v=dNu8iHkncf8
﻿
Posted by Agent Hippo at 1:19 PM