It's almost winter here in Auckland, and it's always nice to have gelato/ ice cream. This is because it will not melt as easily as during the summer.
I have been wanting to have waffle since early of the year but never have the chance till recently. It was after our dinner at Gion, Ponsonby that we decided to have a cup of gelato to share.

Casa Del Gelato was (and still) having the promotion of waffle and a scoop of gelato at a very reasonable price. Therefore, we decided to take up this promotion as I had been wanting to eat waffle.

Since it chilly out there, we went into the indoor seating and took some photos while waiting for the waffle and gelato to be served.

Ta da! To my surprise, the waffle and gelato combo had arrived in less than 5 minutes. AND I am dissapointed! 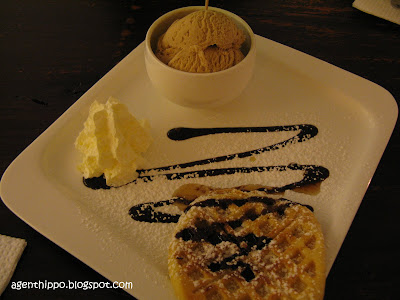 I am actually expecting a freshly made waffle instead of frozen type waffle that was being warmed up before serving. Hence I am dissapointed!

However, thinking at the bright side, it's good to have a mini ones since it's already late at night.

The gelato from Casa Del Gelato is always good. And I had chosen the hazelnut gelato to go with the waffle was the hazelnut flavour.

Though I am dissapointed with the waffle, I still enjoyed the yummy gelato!