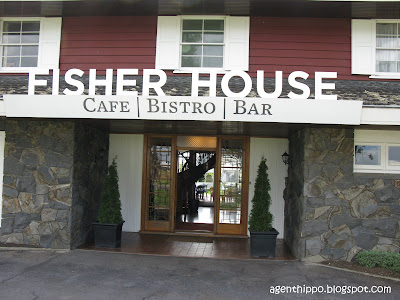 Fisher House was built in 1962 by Sir Woolf and Lady Fisher on their 177 acre racing stud farm back then. It was the original stud homestead which played host to those of the great and good during the 1960s and 1970s. This includes the visits from Queen Elizabeth II, Price Charles and others where the photos are being displayed in the Fisher House. Sir Woolf was also one of the founder of kiwi company Fisher and Paykel.

Fisher House had been refurbished with minimal changes to its original features. It's amazing to see that this house was being built with entertainment in mind whereby as you entered the house, you will be at the grand lobby with a nice curving staircase in front and a garden terrace behind it. There's also a billiard room, cosy study room, intimate drawing room, large dining room and a fully equipped bar being built in this house. From that, you know that the importance of quality lifestyles had been adopted in this house back then. 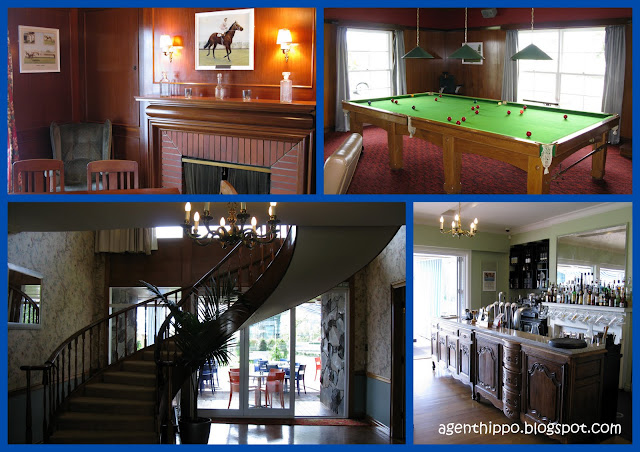 Alright, back to the restaurant now. Since it was quite a sunny day, we chose to sit indoor at the large dining room which was located just next to the bar.

Then, we ordered a BBQ chicken thigh open sandwich with char grilled vegetables, paprika and lime mayo as one of the main. Another main that we ordered was the beer battered fish and chips served with Asian coleslaw and dill mayonnaise. Instead of chips, we requested to change it to duck fat wedges. Both the main are yummy, and I enjoyed it a lot especially the duck fat wedges! Yum, yum! 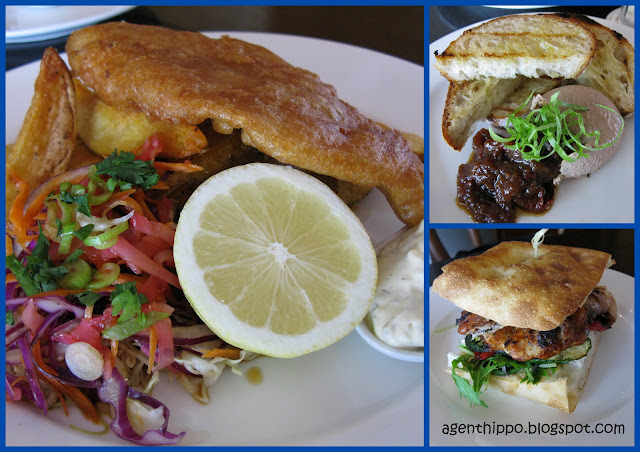 What will you think of when you think of Easter? Easter bunny or Easter egg? Well, to me it's both of it.
Easter Sunday, which usually falls in the month of April, is widely celebrated by the Christians around the world. I am not a Christian, hence I actually surf the net to get the meaning of Easter. Easter day is the day Christians remember Jesus rising from the dead on the third day after his crucifixion. During this celebration, Easter eggs decorations is a common motif in the western countries and customs such as egg hunting and Easter bunny is also available.
Yesterday, we were visited by an Easter bunny from one of the church nearby our house. They are inviting the kids to participate in the Easter activities provided in their church during the Easter Sunday.

In the western countries, usually you will be able to see Easter bunnies and Easter eggs widely available at any supermarket or dairies from end February onwards. All the Easter eggs and bunnies usually comes in a form of hollow chocolate formation of egg or bunnies in different varieties of chocolate flavours and brands. However, there are also some other ones such as the bunny shaped marshmallow/ soft jelly being sold.
As my partner's family are Christians and they are also celebrating Easter day. Therefore, he bought two Easter chocolate bunny for his two nieces. Our first option was to buy the Cadbury Easter chick chocolate, however later we found the Kinder with surprise bunny. Hence my partner bought two Kinder with surprise bunny for both his nieces. As for ourselves, we bought the Lindt dark chocolate bunny. 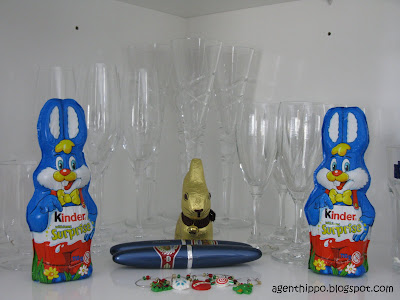 We will be passing the Kinder with surprise bunny to both my partner's nieces tonight. Hopefully they will like it.

Radiation is now a big concern in Japan after the nuclear reactor meltdown in Fukushima. There are a lot of people worrying about contamination of radiation for food in Japan. I am sure the sales for all food from Japan will be dropping.
However, I had earlier on bought Pocky chocolate from the Japan Mart here. One good thing about buying Japanese or Korean food is that, when compared dollar to dollar with Malaysia, it's so much cheaper and affordable. Even certain products, after conversion from NZD to Malaysian Ringgit it is still cheaper. Therefore it's one of the luxury here to be able to get Japanese food at a reasonable price. 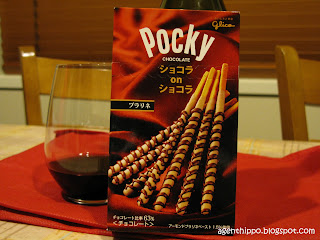 This Pocky that I had bought it's a little different as compared to the normal Pocky which chocolate coating. This Pocky is coated with thick layer of chocolate and praline. Therefore, when eating it, it may taste like you are having Nutella on the biscuit. There are still many others varieties available. Will try it out one by one. It comes in a snack pack inside, whereby three sticks of Pocky are being packed in a little bag. There is a total of 4 packs in a box.
It's always nice to pair dessert with a glass of wine. Hence on one particular night, my partner and myself shared a 3pcs Pocky little pack together with a glass of Akarua Pinot Noir. It's definately not enough to share for the both of us. I was quite tempted to have another packet myself, but discipline myself not to. Anyway, it's always good to indulge one in awhile. Of course, not to overdo it as well.
Cheers!
Posted by Agent Hippo at 11:37 PM No comments:

It has been awhile since my visit to Parnell. I think my last visit was like a month ago or more. Been running around Queen Street and Newmarket for that one month. Finally last Sunday, we were back again to Parnell for food.
Initially we wanted to go to Tribeca at Parnell too, but unfortunately Tribeca wasn't open on Sunday. Therefore, we adjourned to Iguacu Restaurant & Bar. (Iguacu being pronounced as Ig-wa-soo, named after the Iguacu falls on the Argentina/Brazil border.)
Before we entered, we saw this signboard indicating that bluff oysters are being served. Bluff oysters had been in the season since March, and my partner had been mentioning it since that he will bring me to a restaurant to try out the delicious bluff oysters. Finally, I managed to taste it in Iguacu.
Hence, for a start, we ordered half dozen of fresh bluff oysters. The looks of bluff oysters are different as compared to the pacific oysters. The bluff oysters texture are not as thick and fleshy as compared to pacific oysters. I personally find that bluff oysters is far more superior than pacific oysters after tasted it, and it had climb up to be my favourite type of oysters. 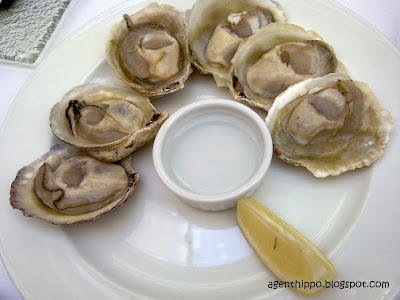 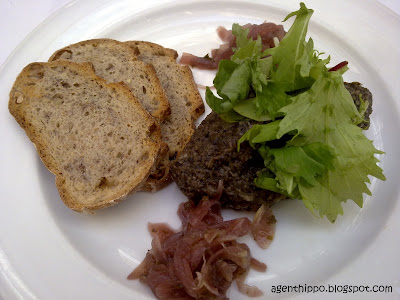 Then, it's time for the mains to be served. As we were there for our brunch, we ordered one main from the brunch menu and another from their all time menu.
I had chosen to try their Iguacu Big Breakfast, whereby there's 2 streaky bacon, two eggs, breakfast sausages, grilled tomatoes, mushroom, rustic hash, and chunky ciabatta. As for the two eggs, you have a choice on how you want your egg to be. I had chosen the scrambled egg for my big breakfast. The serving portion was big to us, therefore, we shared this big breakfast among 3 of us. 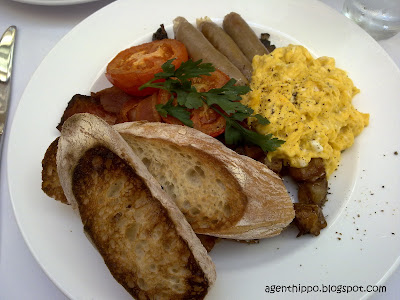 Of course one main would not be able to satisfy 3 hungry tummy. Therefore, the second main ordered was the Big Eye Tuna which was being char-grilled rare, on buttered baby potatoes and summer greens, with pistachio, fresh orange and lemon oil. There's an egg being served with this main and as well, you can choose how you want it to be. For this main, my partner's mother had chosen the poached egg. 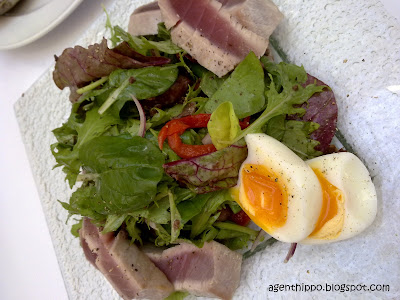 Sometimes of the day, it's just good to have simple dinner at home. Soup is one of a good choice to have especially during the start of the autumn now in Auckland.
Here, you can easily buy a fresh ready made soup off the shelves from any supermarket with different variety of brands and flavours.
We had bought the Artisano - The Godfather Minestrone Soup to try it out. The soup contains 52% of vegetables which made of chopped tomato, potato, carrot, onion, green beans, cabbage, celery and spinach. Apart from the vegetables, there are two different type of pasta and white beans in the soups, which makes the soups a more substantial food. To prepare this ready made soup is so easy that you will just need to heat it up with a microwave or reboiled it in a saucepan. Then shaved some parmigiano reggiano over the soup when serving it. No fuss at all! 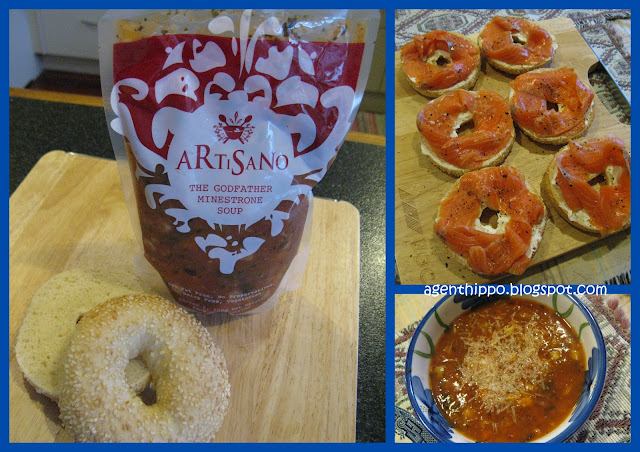 As this was a dinner for us, we paired it up with a piece of Abe's Real Bagel - Sesame each to fill up more of the empty spaces in our tummy. My partner made us the smoked salmon with cream cheese bagel to go with the soup. All he did was just to reheat the bagel in the oven toaster for about 5 - 10 minutes (depending on how crunchy you like it to be) then just spread the cream cheese and smoked salmon on top of the bagel.
Isn't that easy? The beauty of it, it's that all ingredients are readily available off the supermarket shelves and it's an healthy options as well. You just need is just about 20 minutes to prepare a simple yet delicious dinner.
Artisano website:- www.artisano.co.nz
Abe's Real Bagel website:- www.abes.co.nz
Posted by Agent Hippo at 3:01 PM No comments: