Whenever I passed by cafe/ restaurant like this, I will have the impression that it won't be good. However, after looking at the varieties of food being served through the cafe window, my partner and I decided to give it a try. 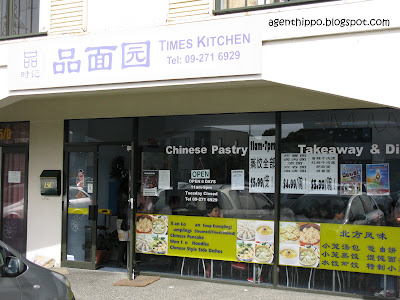 Times Kitchen provides selection of Northern China dumplings and dishes into Auckland. The menu had wide selections of steamed dumplings, boiled dumplings, pan fried dumplings, pancake, cold dishes and noodles.
We ordered a cold dish, which is the potato mixed with red chilies oil. As according to my partner, this is the type of dishes that he used to had when he was at the northern part of China. I am not a big fan of this cold dishes. 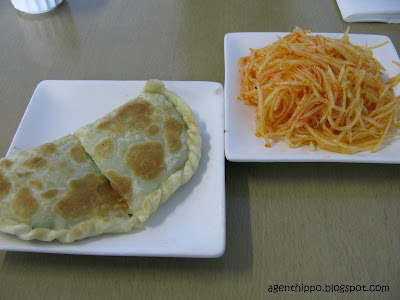 We also ordered the chives pancake. At first, I thought the pancake will be in a round shape and big. Therefore, we didn't ordered a lot. It turned out that the pancake was in semi-circle shape. Inside the pancake was filled with heaps of chives and minced pork. It's very good. The pastry was also very light.
Since the menu had wide variety of dumplings which seems to be their specialties, we ordered one steamed dumplings and one boiled dumplings.
Shanghai soup steamed dumpling, which is also widely known as "xiao loong bao", is what we ordered. It was also served with a plate of shredded ginger, whereby the proper way to eat the dumpling is to dip the dumpling into the vinegar with shredded ginger. I am happy that this cafe provided the shredded ginger when serving the "xiao loong bao" because this is hardly being practised by restaurants that served dim sum. 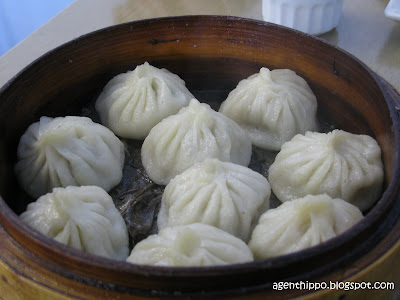 We also ordered the pork and cabbage boiled dumpling. When the dumpling arrived, we were amazed with the amount of dumplings on the plate. Looking at it, it has easily 24 pcs or more! We were thankful that we didn't ordered too much to start with. 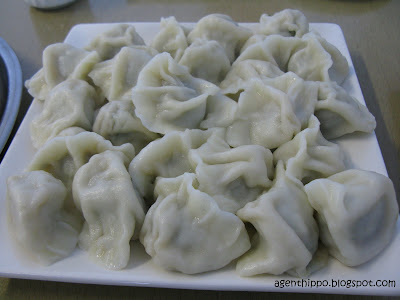 There's only myself and my partner, and we were struggling to finish all the pork and cabbage boiled dumplings. We ended up having to take-away the leftovers.

Overall, the dumplings and pancake are good and reasonably priced. However, I personally prefer the pastry of the boiled and steamed dumplings to be a little thinner.

My partner and I will definitely visit Times Kitchen again sometime soon.
Posted by Agent Hippo at 10:30 AM