Panettone is always available at the shelves of the bakeries and supermarkets during the Christmas seasons.
I never know and never realised about panettone until last two years when my partner introduces it to me. Then I began to realise it is also available in Malaysia at that time as I saw it selling at the Giant hypermarket during Christmas seasons. 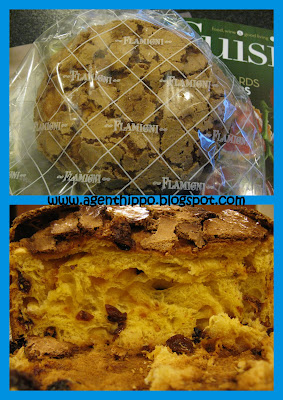 "Panettone" derives from the Italian word, "panetto" which means a small loaf bread. It is originated from Milan, whereby panettone is always prepared and enjoyed during the Christmas and New Year celebrations in Italy, Malta, Brazil, and Switzerland. However, as panettone being exported to other countries such as New Zealand, Malaysia and etc, it is getting it's popularity in these countries.
"It is made during a long process that involves the curing of the dough, which is acidic, similar to sourdough. The proofing process alone takes several days, giving the cake its distinctive fluffy characteristics. It contains candied orange, citron, and lemon zest, as well as raisins, which are added dry and not soaked. Many other variations are available such as plain or with chocolate." (Source from Wikipedia)

Though Christmas season had passed quite some time ago, I am still able to try out panettone as my partner bought a 500gm panettone and kept it till recently. He bought the panettone from Sabato, the shop that sells fine Italian, Spanish and French food, in the month of December. It's my first time trying it and it's so yummy. 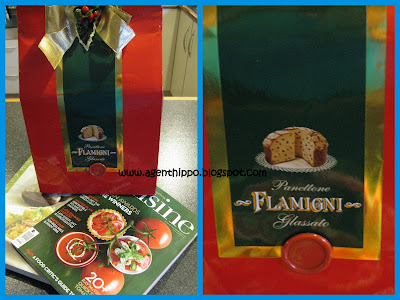 In order to taste the freshness of panettone after being kept for long, it's good to always reheat it in an oven for about 15 minutes before cutting it into slices. Panettone taste in between of a bread and a cake, and the texture is so light, as you can see from the photo above. It's so yummy!

That reminds me that we still have another half of panettone available. Maybe we shall have it tonight as a dessert before it expires!
Posted by Agent Hippo at 3:28 PM